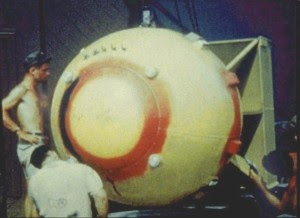 Kokura, an ancient town in Japan, had been the primary target of the nuclear weapon "Fat Man" on August 9, 1945, but on the morning of the raid, the city was obscured by clouds and smoke from an earlier fire-bombing of the neighboring city of Yahata. Since the mission commander Major Charles Sweeney had orders to only drop the bomb if the target was sighted, he was ordered to proceed to the secondary target of Nagasaki, where the weapon was dropped.