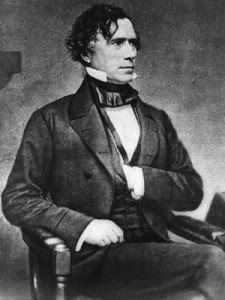 Franklin Pierce, the 14th US President, from 1853 to 1857, had a life that was beset by tragedy. His wife, Jane, was never comfortable with the public life of the politician. Their first child, Franklin Pierce, Jr., died three days after birth in 1836. their second child, Frank Robert Pierce (August 27, 1839 – November 14, 1843) died at the age of four from epidemic typhus. Jane suffering from depression convinced her husband to resign his Senate seat and return back to New Hampshire, which he did in 1841.

Their son, Benjamin "Bennie" Pierce was born April 13, 1841. He became the most important person in his parentsi lives. But in 1852 he was nominated as a dark horse candidate in the Democratic National Convention and was elected President.

On January 16, 1853, two months before the inauguration, his son Benjamin was killed, at the age of 11, in a railway accident in Andover, Massachusetts. The Boston & Maine noon express, traveling from Boston to Lawrence, was moving at 40 miles per hour when an axle broke. The only coach, in which Franklin Pierce and his wife were also riding, went down an embankment and broke in two. Benjamin was the only one killed.

Jane Pierce was overcome with melancholia and distanced herself from her husband during his presidency. Franklin Pierce is considered one of the worst of all the US presidents.