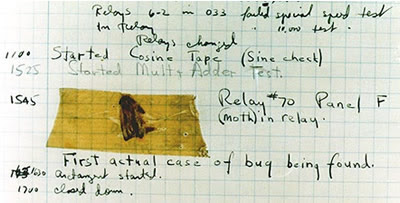 The above picture is from 1947 and depicts an actual bug that was extracted from the Havard Mark II, an early computer system built at Harvard University (few computers existed throughout the world at this point). The bug is a moth and was trapped between points at “Relay #70” and “Panel F” and was discovered on September 9, 1947, several months after the computers first realistic tests that July. Many people use this anecdote to explain the etymology of the term “computer bug” and “debugging” but they are actually incorrect. The term had been used for decades to describe any sort of technical malfunction.